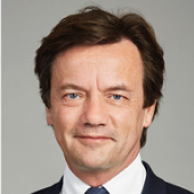 Laurent Chenain began his career in 1988 at the Corporate Finance Department of Banque Indosuez in London. In 1989, he joined the Project Finance Division where he held various positions, first in the Infrastructure (Lodging) team and then in the Energy Team. In 1997 he was appointed Head of the Oil & Gas team inside the Energy Group of the Project Finance Division where he contributed to develop the franchise of the Bank in this sector.

In 2000, he joined the Leverage Finance Division of Crédit Agricole Indosuez and took over the responsibility of the French Team in 2003.

Since 2004, he has successively co-headed and then headed the French Leverage Finance Team (SFI) of Crédit Agricole CIB. He became Global Head of Real Estate in 2012 (DIH).

Laurent Chenain holds a Masters degree in Management and a postgraduate diploma at ESCP.